Ban Laem is an important hub of fisheries in Phetchaburi. Dozens of fishing tools and rows of dried fish and squid usually lay around the house, the buzzing of marine traffic and the chopping of bamboos along the shore line are the childhood memories of Korakot Aromdee, the boy from the
shores of Ban Laem.

What young Korakot love most about his childhood was the “kite” made by his grandfather. His Grandfather was a great kite racer of Ban Laem. Equipped with their excellent knowledge on wind characteristics and wind flow, the people of Ban Laem are expert kite makers. The art of
binding and tying ropes of fishing tools and kites form the basis for Mr. Korakot’s bamboo art, later on in live. The brand “KORAKOT” is a world renowned bamboo handicraft. Famous brands such as Hermes and Louis Vuitton uses items from KORAKOT to decorate their shops. Master pieces of
KORAKOT can be found decorating various restaurants, hotels, and five stars resorts around the world. The brand has been invited to display at the MAISON & OBJET, France, which is one of the biggest product design exhibition in the world.

During the time, when Mr. Korakot studied his Master’s degree majoring in applied arts, at the faculty of Decorative Arts, Silnpakorn University, he received the chance to incorporate local with modern arts. He also learned how to make crab catchers and chula kites from his grandfather, whose technique of binding, splinting, bamboo splicing, basic structure, and the characteristics of Phetchaburian bamboos, has been passed down thoroughly. This paved the way for his Master Thesis and later his business. From his extensive knowledge of materials and magic-like skills, Mr. Korakot is able to create unique bamboo master pieces inspired by local handicrafts.

Moreover, Mr. Korakot also creates jobs for his community by taking young decedents of the Ban Laem fishing community under his wings. These youths has absorbed the technique of netmaking, trawl-making, traditional pontoon-making, as well as the art of binding, and fastening, while growing up, it could be said that these technique is in the blood of every fishermen. Once members of the community have join forces, they were able to execute all the knots-tying expertly; it truly is a part of them, something that they saw their grandparents do since they were young. Not only is he able to increase the income for community members, he is also able to preserve local cultural legacy for future generations. Mr. Korakot has pointed out the connection between the makings of fishery tools by members of Ban Laem with other communities in Phetchaburi.

The fishing industry of Ban Laem is related to the production of ropes from Bang Khunsai area, these are the ropes used in producing fishing tools. The bamboos for making pontoons comes from Kaeng Krachan district and Nong Ya Plong district along the Tenasserim Range, the bamboo merchants usually makes rafts and drift down the Phetchaburi river to sell their bamboos at the river’s end, which are the Muang and Ban Laem districts. In turn they would buy seafood on their way home. The history of Phetchaburi can be explained in an intriguing way through the aspect of a small local livelihood such as Ban Laem.

Art is born out of necessities in live. From his bamboo art he has discovered a connection between bamboo works and local food; he was unable to curve the bamboos until he received a tip from his grandfather, that he should use palm sugar when curving bamboos, because palm sugar possesses a higher boiling point than water, which means that it can be easily absorbed into the bamboo joins. This is but a small example of fascinating local wisdoms. If they can be utilized to the fullest of their potential they could improve the livelihood of the community, also known as “Creative Economy”.

The interesting question Phetchaburi needs to answer is how to utilize the abundantly available art, both local and modern, to create new income possibilities, and opportunities, as well as to carry on the knowledge in a sustainable way. 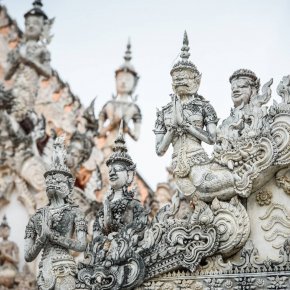 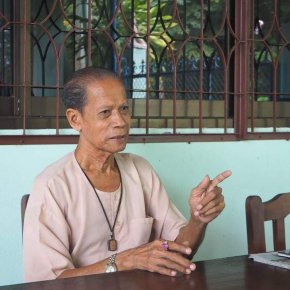 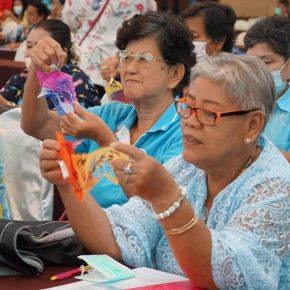