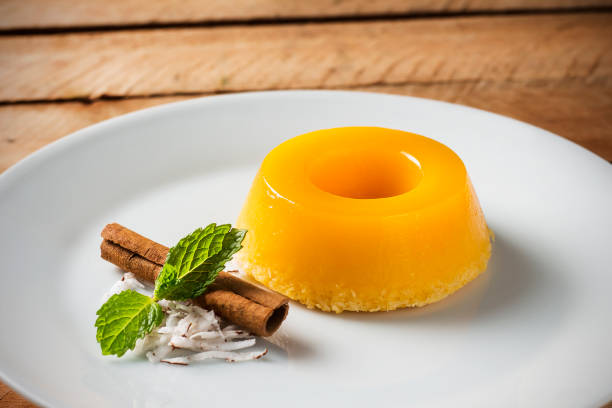 The Working Group for driving Phetchaburi towards UNESCO's Creative Cities Nework has the opportunity to explore food both traditional and fusion dishes. Some already being served to the guests of Hotels & Resorts and some are new creations. Each menu is surprising, different from our familiar dishes and most importantly each menu is interesting and unique.

For Fusion food EP1 we would like to present the QUINDIM dessert menu which has a very interesting history. It is said that the person who invented many Thai desserts and put them into a beautiful golden pans decorated with beautiful baisi. People believe that she is Thao Thong Kip Ma a woman of Portuguese-Japanese descent Thao Thong Kip Ma's paternal ancestor was Japanese who married a Portuguese man.  She has the same name as it appears in the records of Reverend de Soisy is “donaGuyamar de Pina”. That era corresponds to the reign of King Narai of Ayutthaya. It was a time when Siam had relations with foreigners. And there are many foreigners who have become Siamese.

The story of Thao Thong Kip Ma dessert it is believed that food such as Thong Yib, Thong Yod, Foi Thong, Custard and MohKaeng originated from Portuguese sweets. The main ingredients are eggs, flour and sugar and other raw materials in the land of Ayutthaya but have been modified to be different from the original according to the creation of Thao Thong Kip Ma. Over time Thai people have adapted the sweet in both appearance and taste to suit the Thai taste.

As for other desserts, such as KhanomFarang, Khanom Ba Bin, MohKaeng, and Custard, it is understood that they should be adapted from Portuguese desserts, and most importantly, KhanomMohKaeng is believed to come from a dessert named “Kumphamas” which Thao Thong Kip Ma was adapted from European desserts to offer as a snack to the King, which is now considered a signature of Phetchaburi province.

Today we will talk about QUINDIM as a dessert that uses Phetchaburi ingredients and Portuguese culture. Nowadays QUINDIM is a popular Brazilian dessert and the roots are actually of Portuguese influence. Portuguese sweet food is found in many cultures for example Foi Thong appears in more than 13 nations.

QUINDIM pronounced as “Quing Jing” is a dish that is similar to both “KhanomMohKaeng” and “Khanom Bah Bin” because the ingredients used include egg yolks, sugar, coconut milk, grated coconuts that are bake until it turns golden brown.

But unlike MohKaeng when served Quindim is served cold and turned upside down so that the golden brown side of the coconut is at the bottom and the bright yellow is on top.

The working group had an opportunity to meet with the management of Lava Huahin Hotel. Including KhunPiyamanTechapaiboon and KhunKulnartKanathanavanich who introduced the group to the Quindim dessert that was interesting, similar to other Thai desserts we know and It’s the signature of the Lava-Huahin Hotel. It is inspired by the ingredients that are like other Phetchaburi desserts made with the main ingredients that can be found locally. Dry coconut flake, eggs, coconut milk and sugar are baked for this beautiful dish served with coconut caramel sauce. The menu has been modernized with the addition of Macadamia nuts served with ice garnished with Kaffir lime leaves that add beauty and unique colors.

Thank you for the story and photos from KhunWasumaKanathanavanich and KhunPraew of Lava Huahin.